Summary:  Why should you care? You can pick up Principles, by Ray Dalio and turn to any page and learn something. Ultimately its a wonderful collection of well thought out “How To’s.” It is filled with great examples, visuals, and sensible approaches. Perhaps its greatest strength, terrific approaches to life and business, becomes its weakness. For most of the 567 pages it lacks the human connection. And in that sense Ray Dalio is as real to me as Socrates.

*Day Dalio wrote a follow up book to Principles called Principles for Success. It is organized to be more easily consumed. My biggest criticism of his prior book, the length, is addressed. See this review for more: Billionaire Ray Dalio Adapts His Communication Strategy To Reach A Wider Audience 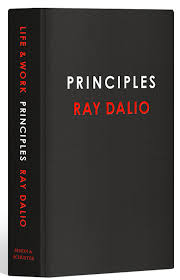 Detail Review: I start with aesthetics. The hardcover book is well constructed. It’s black with white “PRINCIPLES” and red “RAY DALIO.” The font is large. Pages go by with relative ease. There are visuals throughout as well. For a hearty book you need some pages which go by quickly. They help the sense of achievement. I’m also a fan of ribbon book marks. When the book is on its side I like to look and see how far down the page the marker is. Again, accomplishment.

Before we get into the subject of the book, I’d offer another: Rules of Thumb by Alan Webber. It has 52 rules which are each about three pages in description. It is easy to consume and with deliberation, easy to put into practice. For more see my review: Rules of Thumb – A Review

On to the subject of the book: Principles. How I think about principles is certainly as a sort of ethical code. That if you live by them then the results are something you can mentally reconcile. To get reflective for a moment. Life is short. One day you will want to look back and say “I lived a proper life.” Perhaps not virtuous, but fair.

This was never truer than with the death of Socrates. At the bottom of the review is a video highlighting the debate: be loyal to your principles and die. Betray them and live.

You’d want the same for your organization. You’d want it organized by Principles which reflect your values. Follow with policies, standards, and procedures. This creates a clear lineage between the type of company you want to be and the one you actually are.

Back to the book. It is divided into three sections: An introduction, life principles, and work principles.

The introduction is perhaps my favorite part. Dalio is very transparent especially as he describes his upbringing. He isn’t a good student in school; the subjects didn’t interest him. He buys some stocks with money he earns caddying. At first he thinks he’s smart, but realizes the market itself was doing well. He goes from college, which he loved, through the building of his company. Several stories of the ups, the downs. He has a few realizations through his journey. A major one is to learn from his mistakes and to codify them. This evolves to be his principles.

Next is the Life Principles. This is my next favorite section. These can be applied without an organization. They are like a new year resolution. Or perhaps a personal constitution. If the book ended after this section, it would be worth every penny.

Last is the Work Principles. It comprises much of the book. Each one is useful, but they are best served reading in chunks and not in long reads. This influences my overall view of the book. More than half of it is best read not as a story, but as guidance.

So what are the “Principles?” He has several. Perhaps the easiest ways to get them is through Twitter and Linkedin. Dalio posts them practically daily. But here are a few I pulled out.

The principles are chapters and are numbered. Then there are mid-level principles designated as a decimal e.g. 1.1. Finally, there are sub principles, which are letters such as 1.1a.

Life Principle 1 – Embrace Reality and Deal with It. I like this one because people, myself included, like to rationalize, tell themselves stories, and avoid tough decisions. Its better to face reality and act accordingly. Luck won’t save you and eventually no one else will. Creating the discipline to see your future and make it happen is such a valuable thing to live by.

Life Principle 1.8 – Weigh second- and third- order consequences. This is a nuanced principle. Most people solve the problem in front of them not realizing the solution may have created new or different problems. For example, suppose you excercise to lose weight. You have a good routine and get a sweat. Later when it’s time to eat you prepare a little more than normal. You’re really hungry because you’re expending more energy working out. But now you’re also eating more to compensate for the deficit in calories. So you can’t just excercise, you also have to diet. The first order consequence was addressed, but not the second and third.

Life Principle 2 – Use the 5-Step Process to Get What You Want Out of Life. This process is referenced several times throughout the book. Check out the visual: 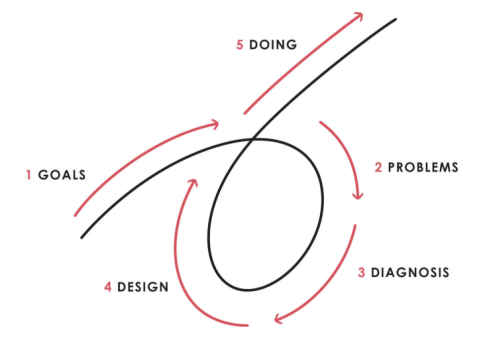 Life Principle 3 – Be Radically Open-Minded. Being open minded allows you to understand problems and the solutions for the possibilities that created them. No one and nothing is perfect. To get quality results being open to different perspectives, viewpoints, cultures, and ways of doing things is necessary.

Work Principles – An organization is a machine consisting of two major parts: culture and people. He presents this via this visual. As the Work Principles unfolds he goes further into each aspect.

Another major tenet of the Work Principles is the Idea Meritocracy. He pushes his company, Bridgewater Associates, to have an Idea Meritocracy which is defined as Radical Truth + Radical Transparency + Believability-Weighted Decision Making. They realize this vision through consistent feedback and constant evaluation. While good in theory, I don’t think in practice this is for everyone. Dalio acknowledges this reality and says many individuals sort themselves out of the company as a consequence. I wonder if talented individuals are missed out because of this structure? I assume so, but Dalio believes the benefits outweighs it.

Work Principle 3 – Create a Culture in Which It Is Okay to Make Mistakes and Unacceptable Not to Learn from Them. This principle isn’t controversial. You want people who are eager to make a difference and take on an acceptable amount of risk. Learning from situations is by itself a benefit. Its likely you can apply those learnings elsewhere. Thomas Edison once said he didn’t fail in making the lightbulb. He found 2,000 ways to not make one. And only needed to find one way to make it work.

Work Principle 6.4 – Once a decision is made, everyone should get behind it even though individuals may still disagree. I’ve seen passive agressiveness first hand. People will agree to a decision in a formal setting, but then walk away and not truly commitment and at times undermine it. Organizations need to work to prevent this, whether through culture or through other mechanisms.

Work Principle 9 – Constantly Train, Test, Evaluate, and Sort People. This is one section I felt worked best in theory. As I read the book I got a sense this is what they do, but the human side of it must be taxing. If you’re constantly being sorted and evaulated, (perhaps a reality anyway), you never really relax. You are constantly looking over your shoulder. If people are compensated a certain way I could see this being less of a concern i.e. they make enough to cover expenses like a house. But if they don’t you’d get people who want to maintain the job. When this principle is tied to Work Principle number 3, the mistakes oriented one, you have to balance it. Take risks and learn versus being constantly evaluated.

Work Principle 16 – And for Heaven’s Sake, Don’t Overlook Governance. Having an infrastructure where accountability is built in is very important. It ensures hubris and proper risk taking is addressed on an ongoing basis.

Tidbit – I really like the example of how to tell good stories. He describes a process where the story has things that happen, but then shows for some parts of the story you want to provide more detail and context, but if you do that too much or don’t keep the story on track you’ll lose the audience.

Summary – The book is terrific, but its girth makes it a bit sterile. Telling stories, as discussed in the book, is a great way for people to connect. It needs more of them. Inspiring? Not really. Good read? Certainly. But only in chunks.

For inspiration, check out this thrilling, just kidding, 40 minute clip of Socrates.

8:23 mark – Can’t expect me to change my ways now – being consistent, in good and bad times is part of the contract with the city or as the Principles book describes, the company.

24:18 mark – The argument for the soul using opposites.

33:00 mark – An interesting metaphor of the soul and a musical instrument.